Everything you need to know about Disc Herniation 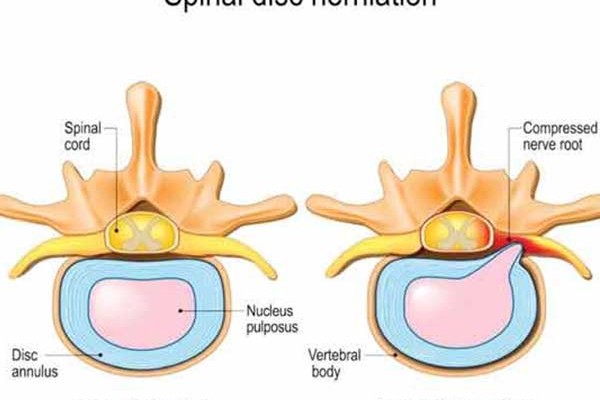 Disc herniation means the movement of discs in the spine. As a result of this condition, intense back pain occurs in that area.

Depending on the area of ​​the back where they occur, the most common types of herniated disc are lumbar and cervical.

Lumbar disc herniation occurs when the movement of the intervertebral disc has occurred at the lumbar level. The most affected are the last two lumbar discs, L4 and L5, due to the fact that they support most of the body weight. The most affected nerves are the sciatic and femoral.

Cervical disc herniation occurs when the displacement of the intervertebral disc has occurred in the upper part of the spine.

Disc herniation is most often the result of gradual wear and tear related to aging, called pulpal nucleus degeneration. As a person gets older, the discs lose some of their fluid content. This makes them less flexible and more prone to cracking or breaking, even in a small movement or twist.

Predisposition to sedentary lifestyle, prolonged sitting, increased exertion after a longer period of rest, lifting weights incorrectly, but also spinal cord injuries are among the causes of disc herniations, explains the orthopaedic in Delhi.

Occupation. People with high-intensity jobs are at higher risk of developing spinal problems. Lifting, pulling, or pushing weights, repeated movements, or lateral bending and twisting may increase the risk of a herniated disc.

Genetics. Some people inherit a predisposition to the development of a herniated disc.

The symptoms of a herniated disc differ depending on the area in which it occurs.

In the case of lumbar disc herniation, there is pain in the thighs and buttocks, which can radiate to the leg below the knee. Pain may be accompanied by tingling, numbness and tenderness in the limbs and affected areas.

In the case of cervical hernia, the pain manifests itself mainly in the shoulders and arms. There is pain in the neck region, with the impossibility of turning the head or making sudden movements.

The pain may be accompanied by tingling, numbness and a general state of weakness. In both cases, the pain is continuous and not throbbing.

Disc herniation treatment should not be delayed because the pain subsided at some point. Lack of treatment can worsen the situation, causing chronic pain or permanent injuries that affect mobility, says the orthopaedic surgeon in Delhi.

Physiotherapy is the most common methods of treating a herniated disc. In severe cases, when the pain persists even after 5-6 weeks of alternative treatment, surgery is resorted to.

The operation consists of removing the fragments of the disc or even the entire herniated disc that compresses the spinal nerves.